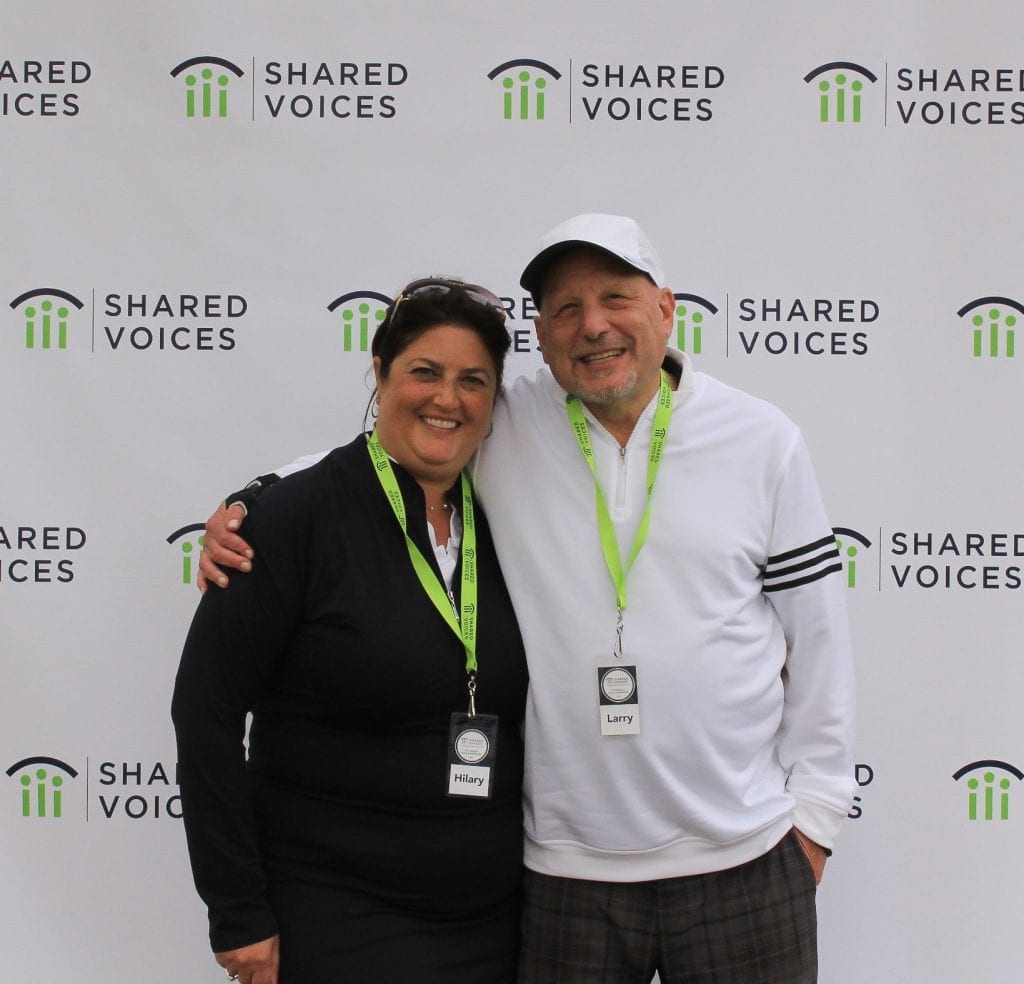 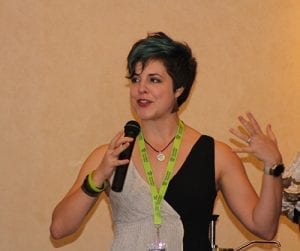 Shared Voices was founded in 2018, with the mission of creating a dynamic, vibrant community space for people who stutter. The vision of Shared Voices is to empower people who stutter to speak confidently and authentically in their everyday lives, without fear of judgment, able to succeed in all areas of life free of barriers associated with speaking differently.

Less than 1% of the population stutters. It is an isolating experience. Feeling like you are unable to speak, unable to say your own name, can prevent a person from accessing one of the most important and basic human needs: personal connection.

At Shared Voices, our goal is to take what is often an isolating experience and turn that very same experience into an opportunity for shared connection. Through our programs and events, we create opportunities for people who stutter to be in community with one another, providing hope and support by sharing stories of personal struggle, challenge, encouragement, and success.

The mission of Shared Voices is to create a shared community for people impacted by stuttering, through programming, resources, education, and outreach. Shared Voices’ vision is that people who stutter will speak authentically and confidently in their professional and personal lives, without fear of judgment or barriers to success. 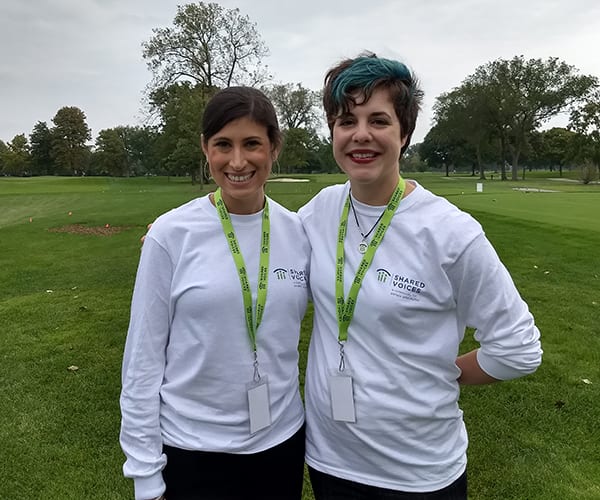 Through our own community and partnership with other organizations, we offer set meeting times and space for people who stutter to share their experiences and support one another. Support groups are available for PWS and their family members.

Connecting Voices is a mentor/mentee program exclusively for people who stutter with the objective of creating a safe space for those who stutter to share openly about their experiences. This program blends accountability, support and socialization. This is a community supported program and there is no fee for participation. Connecting Voices is open to mentors and mentees of all ages. For more information, please contact program coordinator Courtney Luckman at [email protected]

We offer special themed workshops to educate and empower PWS to be successful when navigating a world that is very judgmental about how people speak.

We offer regular social events for kids, teens, families, and adults. Come hang out and have a fun time, free from having to worry about what people will think about your speech. Make a new friend (or a few)!

We partner with local organizations and businesses to offer employment, education, counseling, therapy, and other informational resources to those impacted by stuttering.

What do you hope to see from Shared Voices?

In addition to fostering community and a safe communication growth space for people who stutter, Shared Voices is equally committed to changing how the outside world perceives stuttering.

Our advocacy efforts target employers, educators, and clinical professionals who work with people who stutter. We offer collaborative services and resources that include training, educational materials, and information about how to create more inclusive, empowering environments for those who speak differently.

We practice outreach with aligned non-profit organizations in our local community, such as disability awareness and communication health. We support umbrella efforts by participating in events and providing educational resources specifically about stuttering. 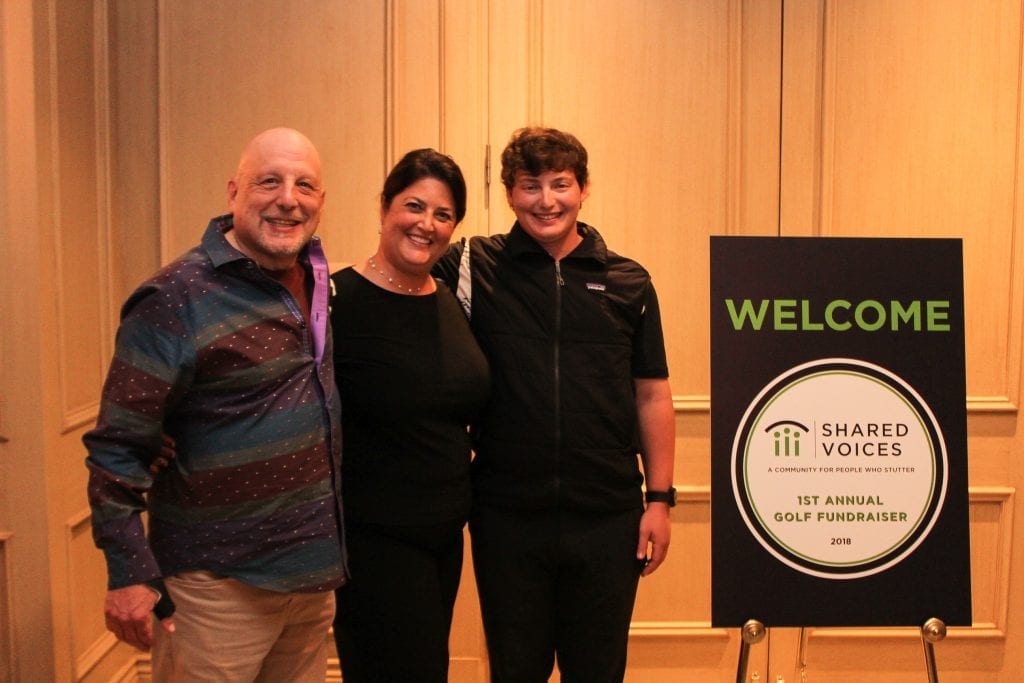 Larry is a person who stutters and father of a person who stutters. Larry clearly recalls the impact of stuttering while growing up. Not knowing any other people who stutter, Larry coped with his speech by learning how to hide his stutter, even if it meant not talking. By the time he was a young adult, he had learned to manage in the world, but nobody knew his secret.

It wasn’t until his young son Lucas was diagnosed with stuttering that Larry disclosed his own stutter to his wife. Although he had learned how to live with his stutter for himself, the old fears and anxieties returned. This time, they were on behalf of his son. Larry didn’t want his son to have the same experiences of struggle and isolation that had been part of his own youth.

This two-fold personal journey is what brought him to found Shared Voices. His desire is that future generations, including his own grandchildren, will have a place where they can feel comfortable and confident when they speak. He wants young people who stutter to experience connection and community through their shared journeys, instead of shame and isolation. Larry is especially passionate about creating employment opportunities and supports for young professionals who stutter, and providing parents of young children who stutter with support and guidance in how they can best help their child.

Larry is a Limited Partner of the Chicago White Sox and a former Limited Partner of the Chicago Bulls. He is retired from a 30-year career in real estate development. Larry is an avid fan of sports and mentoring young people. He coached baseball and football for 30 years, and travel baseball for 15 years. In his free time, he can be found playing golf, working out, and playing cards. He and Hilary have been married for 24 years.

Hilary’s stuttering journey began with her son’s diagnosis at 4 years old. She recalls that one of the greatest challenges was dealing with the academic and social bias against her son, simply because of the way he talked. She was frustrated and confused by the limited view taken by many speech therapists, who didn’t seem to grasp the deep impact of the stuttering experience. She learned how to be an effective advocate for her son, and watched him grow into his own self-advocate as he matured.

Hilary is especially passionate about helping fellow parents of young children. AS a parent, she experienced the isolation that comes with stuttering, because she did not know any other parents or families struggling with the same speech challenges. Hilary hopes that Shared Voices can be a place where children and their parents come together in community, and that parents can share in the joy of seeing their kids “have buddies” who are just like them.

Hilary is a practicing attorney of 27 years in the area of real estate development. She currently serves as acting general counsel for McCaffery Interests. Hilary has over 30 years of experience in philanthropy, volunteering, and fundraising. She served on the Runaway Hotline for 2 years, supporting youth who run away from home. She has served as a donor and participant for Impact 100, dedicated to empowering women-run non-profits. Hilary served on the executive committee of the Children’s Service Board for Lurie Children’s Hospital, and chaired their Gold Coast Fashion Show fundraiser. As Development Chair of Shared Voices, she brings decades of experience in Chicago non-profits to support the mission of stuttering community self-empowerment.

Lucas Gould is a person who stutters. He vividly recalls the struggle and isolation that accompanied living with a stutter. “I used to say that I wish I had no arms instead of having a stutter.” He now feels very differently, which he credits to the help of skilled professionals. However, he wishes that there was a local community support network like Shared Voices when he was younger. In his words, it would have been a “cool alternative” to the trite messages to “just deal with it” when he was younger.

Now a junior at Northwestern University, he has learned to create success for himself regardless of his speech, and his stuttering no longer impacts him the way it did as a child. As a college student, stuttering does not impact Lucas the way it once did, but he says it is a foundational part of who he is.

Lucas is excited to be involved in Shared Voices for two reasons. One, he wants to provide support and hope to others on the same journey that he himself experienced. Two, he wants to educate the world about what stuttering really is, and what it isn’t. Lucas learned to be a staunch self-advocate as early as high school, and has first-hand experience combating the stigma associated with speaking differently. Lucas wants to change the way that stuttering is perceived by teachers, employers, and society at large.

Lucas is currently completing his undergraduate degree at Northwestern University, where he is majoring in political science and history. He plans to pursue a career in law. In his free time, Lucas enjoys playing golf, skiing, and being a Chicago sports fan– specifically the Bears, White Sox, and Blackhawks! 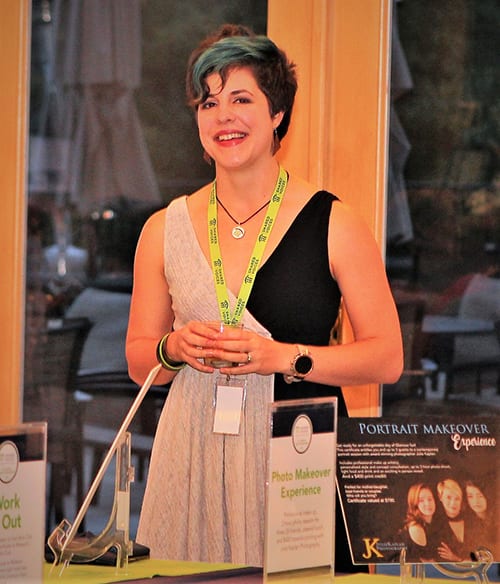 Katie is the founder and president of speech IRL, Inc., a private communications consulting and speech therapy firm. Katie’s career as a speech-language pathologist has centered around stuttering from almost the very beginning. She founded the City of Chicago chapter of the National Stuttering Association in 2013, and was awarded Chapter Leader of the Year in 2015. She is a former member of the National Stuttering Association Board of Directors. Katie is widely recognized in the field of speech-language pathology for her expertise on stuttering and its broad life impact. She speaks regularly at national professional conferences and graduate clinical training programs about stuttering, and is a frequent research collaborator. Katie is an ardent advocate for stuttering and other communication disabilities. Her passion is empowering those who speak differently to advocate for themselves, creating allies in the broader community, and removing barriers imposed by misunderstanding.

Shared Voices was founded in 2018, with the mission of creating a dynamic, vibrant community space for people who stutter. The vision of Shared Voices is to empower people who stutter to speak confidently and authentically in their everyday lives, without fear of judgment, able to succeed in all areas of life free of barriers associated with speaking differently.

Your ticket for the: About Us